Just the pics – Munich or Salzburg.

Munich kicked off what was our second trip to Europe, and I did a LOT of planning. And due to delaying it about a year, even more planning. We left a lot more confident.

Well, when we left. Had to get up at 4:45 for a flight to O’Hare… then a seven hour layover in Chicago (made easier by Katie’s brother and his GF taking us out for a Saint Pat’s brunch and social few. Best. Layover. Ever.), followed by our plane being delayed an hour. Not before we boarded, of course, but after we were on board and cocooned in cramped quarters.

At least the flight had little TV’s.

Arrived in Munich fairly shocked, despite getting some Zzz’s on the plane. Escaping the airport took some time. Played 20 questions with the passport check (at least he stamped it… only stamp I got last trip was upon returning to the US of A), ATM’s didn’t like us at first, had to try a couple. Followed up by staring at the train ticket machine (needed the S-8 to get to Hauptbahnhof) in abject confusion. Fortunately a helpful Münchner came over and helped us find the right ticket to get. This would be a recurring theme here. Each time we were trying to figure out where to go/which ticket to get (uh? How many zones are we going to cross? What do we need? Sprechen zie “Huh?”) another Münchner would show up riding a white horse (ok, no horse) and point the way. Kudos to you, people of Munich! Your helpful nature was greatly appreciated.

(Late note – it has been suggested to me that Germans aren’t helpful so much as they don’t like seeing the disorder of confused tourists and helped us merely to restore proper order and maximum efficiency.)

The long (40 minute or so ) train ride in to town gave us a chance to settle and reset from the initial confusion… only to be met with more. Our hotel, King’s Hotel First Class is located a scant mile or so Northeast of the HBH and is easy to find based upon my google map self-drills. Ok, it is easy to find if you know exactly where you are exiting the station. If you don’t, well, you’ll be spun round, all out of sorts, and wander around the cold for a while.

So, FINALLY we arrived, had cash, found our hotel, freshened up, and were off to Marienplatz. The metro system was easy to use, and unlike our initial exit from the HBH, this time we ascended and BOOM! the Neue Rathaus was staring straight at us. Rather we stared at it, eyes wide and mouths slightly agog.

It was cold and a tad rainy, but we braved the elements and explored Marienplatz and the various churches and passageways. We inadvertently stumbled upon Hofbrauhaus. Found Katie a Starbucks so she could re-energize with her standard coffee candy. We lingered, adventured, and endured the elements long enough to catch the 5pm matinee joust at the Rathaus.

After a brief nap, we met up with Joe, a college friend of mine who has been living in Munich for the last fistful of years at the hotel bar. (Er, he has lived in Munich, not at the hotel bar. We just met there.) Joe led us to the Augustiner Bräustuben, a cozy beer hall. I instantly felt at home. There is just something about the somewhat crowded hall with long group tables and (authentic) old tymee feel that resonates with me.

We started with half liters of the remaining stark bier (their stark bier festival had ended, but there were still some left in the keg) before moving on to helles, basically their lager, which would hold up as my favorite bier of any/all I tried in Bavaria.

The best thing about the bierhall was the conviviality. We quickly struck up conversations with our neighbors, Tomas and Dr. Johannes – not really a Dr, but gave a good lecture on influences to the English language which lead to me calling him Herr Doctor. A great time was had by all and we headed back to our hotel having found a great counter to jet lag… 3 liters of bier.

We got up bright and early Tuesday morning and headed back to Hauptbahnhof once again and were off to Salzburg, Austria. We relaxed during the two hour train ride, taking in the beauty of the country side and the towns along the way. Enjoyed a nice walk from the Salzburg HBH to, then along, the Salzach River towards the charming Getreidegasse, the main drag in Old Salzburg, where all the businesses have ornate and fancy signs – even the McDonalds. Mozart’s birthplace is one of the houses that line the street.

The whole experience was pretty charming, even after hiking a couple miles in near-freezing weather. Although trying to pick a restaurant proved a bit more challenging. After looking over a slew of traditional-looking restaurants, we ended up just stopping in a small modern coffee shop which sported free wifi, some great bread, a coffee for Katie so large I was looking for flotation vest lest she fall in. She got to enjoy a late breakfast plate while I devoured a Prosciutto Panini, followed up with a local bier, Trumer pils.

Refueled and thawed, we returned to the cold and continued our hike to the mighty Hohensalzburg fortress that overlooks the town. There were plenty of cool things to see along the way, Mozart’s statue, the man on the sphere, Kapitelplatz.

Took the funicular to quickly ascend to the top of the hill and arrive at the fortress. The fortress itself was pretty amazing. The view of Salzburg was brilliant, but on the other side of the fortress, the view of the mountains was positively breathtaking. The fortress itself was pretty large, we checked out the ground before taking the tour and eventually ascending to the platform on the very top… where the winds were just ripping.

After descending, tried to hit Stieglkeller for a beer, but it was closed for the week. Boo! Boo I say! Furthermore couldn’t find Augustiner while strolling back to the train station. Did pick up some nice Mozart stuffs for my mom, as he is her favorite composer.

Returning to Munich, we hiked up to Lowenbraukeller for dinner. Got myself a Triumphator and special starkbierfest mug… amusingly the mug is dated 2012. Also enjoyed a mass of helles with a brat sampler plate featuring three different sausages, sauerkraut, potatoes, and a shaved cheese-looking substance that was actually horseradish. Awesome stuff. Katie didn’t enjoy her pork dish quite as much.

On Wednesday morning and hiked over to the Neue Pinakothek, the “new” art museum which focuses on the last couple centuries.… arrived 30 minutes before opening, which might have been good as the weather was warming up (north of 40!) so we hiked back to the hotel, this time going through Konigsplatz and passing some awesome buildings, and the giant “Munich Moon” as I dubbed it, a statue of someone bending over and mooning all to the West. Downgraded the pea coat to a lighter jacket, and strolled back. Lots of picturesque houses and buildings along the way. Caught a special exhibit before checking out the Neue Pinakothek’s collection, the high points of which were a J.M.W. Turner piece, Monet’s Water Lilies, and three Van Gogh

We continued through the city, hiking towards Marienplatz, as the weather was continuing to improve… was actually “warm”. Well, it was when walking in the sunlight. After a quick stroll we ducked into Bratwurstherzl for a quick lunch (and a Hacker-Pschorr) before opting to take advantage of the weather and visit Englischergarten.

More confusion awaited on the subway – unsure of which ticket to get (are we traveling more than one zone? What’s the deal with zones to begin with?), and naturally another local helped us out. Danke, Iron Maiden Fan!

Actually got slightly lost trying to find the MASSIVE garden. Some fellow Americans pointed us in the right direction and we found ourselves a park. Was a bit mucky… and small. Craig kept telling Katie, “this can’t be it, it’s too small!” “Maybe it’s just part of it!”, “Nah, I’ve looked on maps, it’s freaking huge.” (It is larger than Central Park in NYC.)

Eventually, thanks to the Trip Advisor downloadable city guide we actually found the park. (It’s only 910 acres… not exactly sure how one could miss it…) And found out we were well north of Chinescher Turm (Chinese Tower, our ‘target’)… and well north of Seehaus, the beer garden on the little pond. And well north of Hirschau, another of the park’s many more structured beer gardens.

We enjoyed a couple mile walk, trying to find our way. Hirschau was closed, and as the weather started to dip, Seehaus wasn’t really open. Fortunately, the Hofbrauhaus at Chinescher Turm was, Katie enjoyed some tea to warm up, ein mass, bitte, for me. Was entertaining. We were sitting maybe 100 yards from a table of older German men who were working on mas ?, all singing what I assume to be traditional German songs. Some younger girls ended up setting at the table next to them, probably hoping the toasty old men would buy them bier.

The winds picked up and temps continued to drop as we hiked our way back, dropping to “I wish I had my pea coat about now” level. We checked out the Monopteros before entering the subway at Ludwigstrasse. Seeing as we had spent the better part of the afternoon slightly disoriented, why not keep at it? Ended up on the one train that didn’t cut through HBH, instead kept going south after Marienplatz. We were trying to see on the map where we were headed when another nice local ascertained our confusion and helped us figure out which train we needed to grab at the next stop. Danke, Munich, again.

Katie was feeling under the weather, but Craig wasn’t done. Met up with Joe for dinner at the Hofbrauhaus. Far more “touristy” than Augustiner or Lowenbrau the previous nights. And much, much larger. When the Oompah band kicked into the “theme song”, only one person was singing along in our section. We ended up getting to know some of the folks at our table… a Greek with a Russian date, two Lebanese women, two Italian men, and a couple young Japanese tourists. They had been halfway through their first liter when we arrived… Joe and I polished off ours first, then egged them on. Midway through our second liters – and some language lessons – them teaching us some Japanese basics, Joe teaching us all the song – they were already a bit tipsy. Johannes showed up, leading to round three, and us all singing along with the oompah band. “Ein Prosit! Ein Prosit! (I forgot the next few words)”

We left after that, hoping our drei mass night didn’t leave our new friends with too much of a hangover the next morning… Konichiwa, obotsudai! (spelling)

After one last stop at an English Navy-inspired bar for some jet fuel… err.. grog, was time to go, had a 6:30 train to catch the next morning. Said my goodbyes to Joe and Dr. Johannes (who kept insisting he wasn’t a real doctor. Great guy!), and got up really early to trudge through some light hail to the HBH, bought ourselves a massive pretzel, and boarded our am train to Paris… 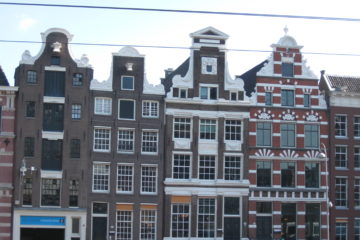 Just the ‘dam pics We arrived at about 2pm, without incident after training it up. Err, wait, not without incident – a few small happenings. Craig stepped out of the train to take a quick Read more… 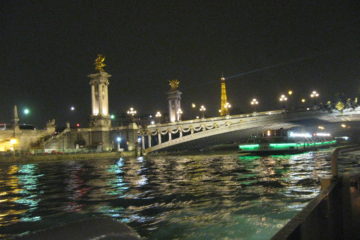 Just the pics.Missed most the train trip from Munich – the side effect of the prior night’s trip to the Hofbrauhaus. I remember it snowing as we started, eating a really swell breakfast (hooray 1st Read more… 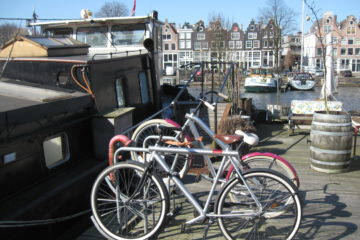