Originally appeared in my old blog May of 2015, have updated slightly with the move.

I love bowling. I am a believer in Earl, the Patron Saint of Monster Truck Rallies, Trailer Parks, and, well, Bowling. I even permanently inscribed his name on the sleeve of my Vandals work shirt/bowling uniform.

Marko, one of the other teachers here formed a bi-weekly (every two weeks, not twice a week. always get those confused) bowling team. Naturally I jumped at the chance.

No, THE bowling alley, is not situated above or below the apartment of Frank “Grimey” Grimes. It is located on the third/upper floor of one of Asuncion’s more fancypants malls, for starters. It has a whopping 11 lanes. While it has a fully functional ball return, the pin re-racking mechanism is vastly different. Rather than free pins jumbling around a mechanism and being reset, these pins are all on strings. The end result is while you still have some action, you won’t get awesome “Avenging Ninja Pin” action like you might in a traditional lane. However, there was at least one case of “Avenging Guillotine String” where the moving pin missed an adjacent one, but the string basically clotheslined the last pin for a spare.

Other oddities about bowling here. You get a ticket when you enter. Or in our case, six or seven, and everything you eat, drink and bowl (you pay for time, rather than per game…) is tallied up. You pay up, they give you another card to hand out at the exit.

Shoes. As usual, you rent shoes. Hooray. Only sizes are all in centimeters rather than our typical shoe size. And over the years, some have been stretched. One week I’m a 41, the next 42.

And as far as eating goes, worlds of difference. In the US food at traditional bowling alleys is often so bad it inspired this exchange in the sitcom Parks & Rec at the food counter of the Pawnee Bowling alley:

Ron Swanson: “When I eat it is the food that is scared.”

Not so here. Best bowling alley food I’ve ever had. They serve the Paraguayan fave, a parilla. A hot metal tray/skillet brimming with high quality beef, chorizo, fries, fried mandioca (a potato-like root), onions, peppers. Ridiculously good. Only thing scary about eating is melting the roof of your mouth as it is piping hot.

In regards to aiming fluid… err, drink, you get the typical Paraguyan set-up, a big bottle of beer in an ice bucket that gets shared. And in our case, because we’re bringing in 6-7 gringos every two weeks, ordering food and beer, they’ve agreed to turn a blind eye to the occasional bottle of white russians we bring in. Or the idiot gringo who opts to don the mascot costume for kids parties after knocking over pins and bottles of Pilsen.

As an afterwards to the initial article, Marko founded the bowling league because his prior school in Santiago, Chile had had a team for years prior to his moving to Paraguay, so he opted to start the tradition locally. We colored our shirts black and yellow in respect to (most of) our favorite futbol club, Guarani. Metalhead me also dubbed us “Stryker, the Yellow & Black Attack” after the Christian metal band of the 80s famous for wearing the same colors.

In May of 2017, the bowlers from Santiago, Asuncion and a pair from Montevideo, Uruguay all descended upon the neutral territory of Buenos Aires, Argentina for a battle of bowling supremacy in a weekend filled with music, bicycling all over BA (including areas of BA one should definitely not bicycle through – yes, that was along our path) and enjoying fine, fine Argentine steaks. And Bowling. The Big Event was great fun, and one Argentine dad and his two daughters, who went bowling together from time to time were so intrigued by 20 gringos throwing rocks and making fun of each other that they sat and watched for a good 20-30 minutes. Really friendly, even offering advice… just wished we could have got them some albiceleste shirts to roll for Argentina.

Leticia and The Amazon 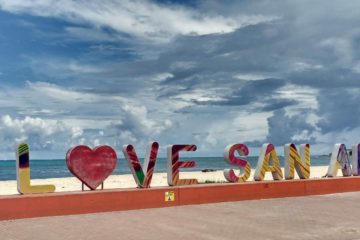 San Andres – Stressed Out In Paradise

or Jimmy Buffet didn’t prepare me for this. (Skip the story, tips… pics here.) My life was flashing before my eyes. Or perhaps it was the Caribbean Sun reflecting off the chrome bumper of the Read more…