After a near five-hour card ride, with lunchtime stop for chicken & rice & LIzano sauce, we made it to La Fortuna. Whereas Quepos was on the coast, La Fortuna was very inland and in the shadow of a giant, semi-active (active, but not actively detonating) volcano.  So the fitting soundtrack is still Jimmy Buffet, though was just “Volcano” on a lot of repeat.

Further, while our airBNB in Quepos was in the thick of things, our place in La Fortuna was a bit more removed, like a couple KM removed. No bustling throngs of tourists anywhere near us. Back yard was brilliant, and nothing but trees in about 270 degrees of 360.  We were part of a side street off a road out of town with nothing but two adjacent houses… and a daycare center.

So when not out exploring, we’d hear kids making noise all the live long day. When working , or just lounging, I’d blare the aforementioned “Volcano” partially to drown out the cacophony, and partly in the hopes the kids would pick up the song and one day when leaving we’d be greeted with six or seven young Ticos singing along “Oh I don’t know… I don’t know where I’mma gonna go when the volcano blow.”

The counter to the kids was they were gone early, and it was nothing but quiet thereafter. We had a fantastic patio, deck and grill so saved some dinero, hit the supermercado and did a couple cook outs to fully utilize the space.

So another town, another spectacular waterfall. This one costs some dinero to get in to see and involves hiking down 500 or so steps to get to the pool at the base and enjoy the spectacular sights and sounds. Enjoy a swim. You’ll want to cool off before the hike back up. Amusingly, when descending, I saw even younger, fitter people huffing and puffing when climbing up. Belly full of chicken, rice and Costa Rican craft, I decided I was going to just do the return ascent in one go. Partly up got griefed by some other American tourists who all but demanded I take their picture, I declined, citing my desire to push on up. Katie, trailing me and taking her time, stopped and took the pic for them. They remarked about me, stating “she’d beat me to the top, he wouldn’t make it.” I did. Wasn’t exactly Rocky climbing the steps after jogging half of Philly but was proud of myself.

Also of note when either down at the pool below or checking out the view from the mirador at the top, you can occasionally hear some noise and possibly screaming… as to the left of the fall in the beautiful picture I’ve uploaded is a landing point for a 960m (over half a mile) long zip line. Over the massive drop to the pools below. This is significant because the following day said screams/noise would be mine.

I hate (unenclosed) heights, she dreads, erm, moving water? So we decided to face our fears the following day in the Day of Twin Terrors. Morning doing some ziplining followed by rafting in the afternoon. All packaged neatly together.

Was done courtesy of Arenal World Adventures, with us opting for the “Extreme” option.  After a short safety video (pay attention to said video, particularly the part where they mention form. Maintain your form at all times. Don’t be me.) we were off. Our first zip required us to ascend a rather rickety tower that at the end of the day would ultimately be the single most terrifying moment of the day for either of us, we did our first zip. It was both frightening and exhilarating. It was also over so quickly.

Next up was the aforementioned 960 meter terror-ride over the pools and by the waterfall. Somewhere along the way I lost form and started spinning, going 60 degrees to the right, then whipping back 60 degrees to the left. End result was I lost enough speed that I ran out of juice. The last segment of the rather long line is a slight ascent to help you lose speed. End result was I suspended a couple hundred feet off the ground and had to manually hand-over-hand lug myself the last 70 feet to the end. Got a nice burn on my forearm that I have since dubbed a “Costa Rican tattoo”.

With that near-disaster behind, I soldiered on, refusing to even glance to the side at the passing scenery, total discipline on keeping my body properly aligned as shown. No further incidents, just a lot of fun. Really enjoyed something I thought would instead leave me mortified.

(During the bus ride back to the office for the transition to our rafting segment, one of our guides applied basic first aid to my arm – namely applying alcohol or peroxide or some other disinfectant that stings like hell to my arm and patching it up. He told Katie I was “brave” for not wincing. I responded it was penance for my sins for being a dumbass and breaking form on the second zip. He laughed.)

Rafting the Balsa was much simpler. We were paired with a family of four from Austin. Katie, upon seeing they had two sons under maybe 11, had her nerves put at ease. Our guide was pretty funny – before disembarking and after the basics (row right, row left, lean in) had us each grab a stem from a nearby plant and insert them into our helmets. “Camouflage” he remarked, “We are very close to Nicaragua.” He also know how to navigate the river so we managed to navigate each rapid in such a way that we’d hit a drop and the entire front half the raft would be submerged.

It was much fun.

It should also be noted that with our valuables safely secured on the bus, we had no cameras for this. Sure, we paid for some of the swell pro shots taken en route, but with nothing to take ourselves, we naturally had our closest encounter of the sloth kind. After vaguely spying sloths in Manuel Antonio that I couldn’t pick out on the pics, even knowing roughly where it was, when cruising down the river we had a three-toed sloth just hanging over the river itself, completely and totally visible, clearly outlined without any camouflage, as if to say. “What’s up, dudes?”

We also took another afternoon to do the Volcan Arenal hike. Amusingly it started raining when driving over to the volcano, more than a mist, but not a drizzle. As soon as we parked, it stopped. We got out, enjoyed a hike through an open field, a forest by a pond, complete with a family of monkeys that followed us from the tree-tops for a couple hundred feet, and finally the lava field the last time Arenal got uppity. Was maybe two hours, pretty hot and humid… which was nicely washed away as the moment we returned to the start point, the rain returned.

Afterwards we stopped for some “craf” beer from a local place with a rather sizable menu, including Lake Arenal Brewing, which had a nice flight.

The following day we drove to Lake Arenal Brewing – probably a mistake.  While it was enjoyable, the beer was good and had a great view of the lake, it was “30km” away, and that 30km was slow going, windy and the roads looked like they’d been bombed out during some errant WW2 shelling. Pot holes were like craters, so a whole lot of weaving. Took like 90 minutes each way. Yikes. Good beer, but good lord, stressful and long drive.

Arenal also has a whole host of hot springs, we wanted to do one, but were running slight on funds and they weren’t cheap and seemed fairly crowded.

Alas, our trip was over. We returned to San Jose for one last night before the flight home. 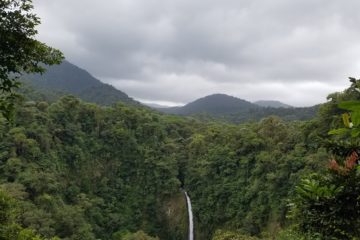 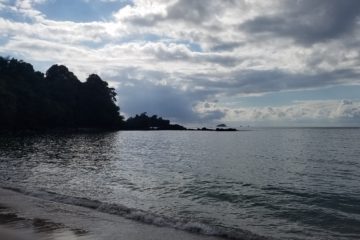 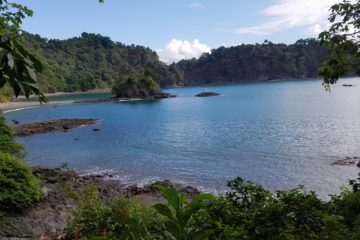 So Manuel Antonio is the big, famous national park you’ve likely heard of if looking into a trip to Costa Rica. Quepos is merely the adjoining town. It’s bigger and much closer than Google Maps Read more…